Stand Up Comedy Club In KL: The Solution To De-stress

Stand up comedy is something that we Malaysians, unfortunately, overlook as we are so occupied with our busy lives. The saying ‘don’t bring your work home with you’ is definitely applicable to the average Malaysian as our brains are always consumed with stress which could be to the detriment of our personal lives. It is always advantageous to lean back, relax and laugh sometimes. Going to a comedy club KL is definitely the way to do just that, other than stuffing yourself with desserts or bubble tea!

Comedy Clubs have not been a big thing in Malaysia in the past, thankfully that is changing. With the rise of people like Harith Iskander better known as “ The Godfather of Stand Up Comedy”, more and more of such clubs are opening up!

Therefore when you are down for some relaxation with a hint of laughter after a long day at work, be sure to check out this list of outstanding comedy clubs KL we have compiled. Don’t forget to bring your first aid kit along because these comedy acts will make you die from laughter.

Crackhouse Comedy Club is located in the middle of TTDI a local favourite to “chill out” at night. This area that is filled with “mamaks”, bars, as well as dessert restaurants, never fails to set the mood for the weekend. Crackhouse Comedy Club is similar in this sense as it’s killer food, a wide variety of alcoholic and non-alcoholic drinks paired with its tear-jerking comedic acts will not fail to meet your expectations for an amazing night.

Being no stranger to the comedy world having already hosted household names such as Harith Iskander and Douglas Lim as well as international acts such as Paul Ogata, Tamer Kattan, and Tom Rhodes. Established in 2014 by  Rizal Van Geyzel, & Shankar Santhiram, Crackhouse Comedy Club has come a long way and has now become a regular place people go to blow off some steam after a long day at work.

Try Your Hand At Stand Up Comedy

In fact, Crackhouse Comedy Club often holds open mic challenges to encourage people to try their hand at stand up comedy and break out of the seriousness of their life. The open mic challenge is held every Wednesday. All you have to do to join is just turning up at the door on Wednesday at 8 pm to sign up but be careful not to be late as the signup sheet closes at 8:45 pm.

You will have to perform for 3 minutes hence having material prepared is a good tip. If you are chosen as the best set you win a total of 100 ringgit as well as the opportunity to perform on one of their weekend shows!

Their weekend shows are not one to miss as they are full of non-stop laughter. Every weekend is presented with a different headliner as well as the occasional guest comic. So if you are interested in learning from the best of the best and seeing how the professionals do it, don’t miss their weekend shows as you will be sure to regret it. All shows start at 9 pm and go on until 10:30 pm with a 10-minute intermission. Tickets will be going for RM 40 ringgit and above.

Upcoming Headliners To Not Miss:

This is a stand-up comedy act to look out for as Justin Heyes has taken the world by storm with his hilarious jokes! Having performed all around the world from Singapore, Brunei, Taiwan, Australia and even all around the United Kingdom as well as getting the title of Perth FringeWorld ‘Best Comedy’ Award Nominee 2018, Justin Heyes is the one to watch out for all aspiring comedians.

Being a stand-up comedian from Russia is in no way an easy thing to do but Arthur somehow has made a name for himself with his humor and killer punchlines. After getting the 1st runner up in 2018 Magners Comedy Competition Singapore as well as snatching the title of the winner of the 2018 Bangkok International Comedy Competition, Artur is guaranteed to be leaving you begging for more of his jokes. As a comedian that travels around the world frequently be sure not to miss this opportunity to be blessed with his jokes.

Besides that Crackhouse Comedy Clubs also regularly hosts other stand up comedy shows and is open every day from 8 pm to 12 am except for Sunday.

If you have heard of Harith Iskander the name “ The Joke Factory” should not be far behind. After being commonly referred to as the funniest man alive, opening a comedy club KL next should not come as much of a surprise. Located in Publika one of the busiest places at night the joke factory fits right in as it is no stranger to entertainment, excitement and just pure laughs.

Rather than it being like most clubs, The Joke Factory is also a place of education as it offers classes on stand up comedy for upcoming comedians as well as kids that are interested in the field as well. So if you are willing to make your workplace embedded with a bit more humor, do not hesitate to take any of these classes up.

Think you are funny? Have you ever wanted to become a stand-up comedian? If your answer is yes then this will be the opportunity for you to give stand up comedy a try!

This is an event held by The Joke Factory themselves to tests their audiences and see if they have what it takes to take the stage for their own. In addition to that, you will also be the test audience for regular stand-ups and established comedians to try out never heard before material and jokes. On top of that, tickets for entry are only RM 20!

The Joke Factory has many other upcoming events that will be tragic to miss as it is definite that they will give you a memorable time.

Making S#it Up is a show that occurs weekly but features different comedians every time and is hosted by Harith Iskander himself. This show is entirely based upon improv and tends to test the creativity and quick-witted nature of the comedians involved.

This show is unscripted but it will sometimes be made around the suggestions of the audience which could include segments and games. This show is to encourage the participation of the audience and to make them feel as included as possible. So if you want to see if these comedians can hold their own without the help of a script and prepared jokes, do not miss this show.

Have you ever heard of Joanne Kam and Bibi Kay Poh? If your answer is no, you are totally missing out. Both being one of the biggest names in South East Asia and having trained in stand up comedy with the legendary Gurmit Singh in Singapore, these two definitely know how to work an audience.

Their material that is derived upon the multiple performances they have done all around the world, tonight’s set will be hard to disappoint. So definitely don’t miss out on this dynamic duo as they are only at the joke factory for 2 fantastic nights.

So while you are having a laugh with your friends and family while watching one of The Joke Factory’s amazing shows, don’t forget to check out their infamous restaurant as well named “Joke and Lok“. They serve all types of western foods but their specialty being “The Balsamic Baller Burger” which is all kinds of tasty. A bite from this burger will leave you desperate for more with its delicious juices and meat that melts in your mouth.

To top it off Joke & Lok also has a dessert section as well filled with mouth-watering desserts. If you are a sweet tooth like me, I would definitely recommend having a go at the “ J&L Virgin Bananut Brownies” as they have one of the best brownies I have ever tasted (and I have tasted a lot). However, if brownies aren’t your thing, they also have a selection of ice cream to choose from.

The Joke Factory is a triple threat with its comedy, education, and food. It will be sure to take away your stress from work as well as heighten the mood to ready you for the weekend. Your first trip here will definitely not be your last.

In conclusion, these two places are the places to go to blow off some steam after work with their jokes, skits and funny material. There will be no regrets of going to a comedy club KL! You will be laughing so much that you have no choice but to forget your worries. 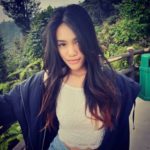 Alycia Ann Lee
Just writing about one experience at a time