Merdeka 118, also known as PNB 118 and formerly known as KL 118 or Warisan Merdeka Tower, is a skyscraper in the heart of Kuala Lumpur, Malaysia, that is currently actively under construction. Known as the “second highest building in the world”, this 118-story skyscraper leaps into the sky at an amazing 678.9 metres height, which would be approximately 149 meters away below Dubai’s Burj Khalifa (828 metres).

In order to pique your curiosity, here is some general information about the Merdeka 118 tower that you should know.

PNB 118 or Merdeka 118 is the official name of the tower. The tower’s name, Merdeka, is a tribute to Malaysia’s independence, and it will be constructed on the site of what was once known as Merdeka Park. One of Malaysia’s largest fund management companies, Permodalan Nasional Berhad (PNB), owns and manages the skyscraper.

It was previously known as KL 118 because it is located in Kuala Lumpur and will have 118 floors. However, it has also been referred to by other names, including Menara Warisan Merdeka, which translates as “Heritage of Independence in English,” and PNB Headquarters, because it will be the new headquarters of the PNB Group upon completion.

Located at Jalan Hang Jebat, Kuala Lumpur, Merdeka PNB 118 is being constructed on a site that is in close proximity to the Merdeka Stadium, where the building is just around 100 metres north of the stadium.

The Merdeka Stadium is a historical landmark in Kuala Lumpur. It is the site where the independence of the Federation of Malaya was formally declared, and it was once the primary venue in the city for celebrations and sporting events.

The stadium has also hosted numerous major concerts, including two concerts of Michael Jackson’s History World Tour in October 1996, which were both sold-out events that drew a total of 110,000 people to the stadium to watch on-site.

In recent years, the Merdeka Stadium has hosted a number of significant concerts, including performances by Avril Lavigne, Jennifer Lopez, Justin Bieber, Mariah Carey, and A.R. Rahman, among many other prominent artists including Metallica back in 2013.

It was last time on November 30, 2021, that the tower’s entire architectural height of 678.9 metres (2227 feet) was revealed, as measured from the ground to the tip of the spire. The tower’s complete architectural height was not revealed until the tower reached its maximum height on that day. But still, it’s going to be the highest building ever built in the Southeast Asia region.

Below is the height’s comparison

This Merdeka PNB 118 tower will be used for Office, Hotel, Residential, Retail, Observation.

The KL 118 Tower will have 118 floors, with the podium floors being occupied by retail stores or a shopping mall, and the remaining 80 floors being used as office space, with 60 of these 80 floors being reserved for the headquarters of Permodalan Nasional Berhad (PNB), which is the building’s owner and developer, as well as the company after which the tower is named.

It will have a restaurant on the 113th floor and an observation deck on the 114th to 117th floors, which will be one of the world’s tallest observation decks when completed. A VIP lounge will be located on the top floor (118th floor). Also, a parking lot in the basement will space for up to 5,000 cars.

Other main objectives to be considered are;

It was designed by the local architectural firm RSP Architects Sdn Bhd in collaboration with Fender Katsalidis, a Melbourne-based architectural practice best known for its work on the Eureka Tower, which stands as the highest building in Melbourne and is one of the world’s tallest structures.

Despite the fact that the architects, Fender Katsalidis, are of Australian origin, their designs will nonetheless be influenced by Malaysian culture. Recognizing that Malaysia is a multi-cultural society, the diversity of triangular designs that make up the structure represent the various ethnic groups that inhabit the country.

For example, as we can see, the design of the high-rise skyscraper was directly influenced by our own culture. In order to replicate the Malay Songket, a traditional cloth that is part of Malay history, the building’s foundation is fashioned like a diamond.

The shape is based on one of the most important moments in Malaysia’s history. In the design of the tower, the silhouette of Tunku Abdul Rahman lifting his hand while yelling “Merdeka!” on the 31st of August 1957 is shown, which we can all agree was a watershed point in Malaysian history. During the chant, the spire on top of the structure is intended to resemble Tunku Abdul Rahman’s hand, which is represented by the spire. Below is the picture for much more understanding.

What’s more special is, the building at night might be looking more futuristic. The form of the structure may be reminiscent of the past. However, at night, the metropolitan skyline takes on a futuristic vibe. The world’s soon-to-be-second-tallest structure will be outfitted with light strips that will gradually travel from one corner to the other. 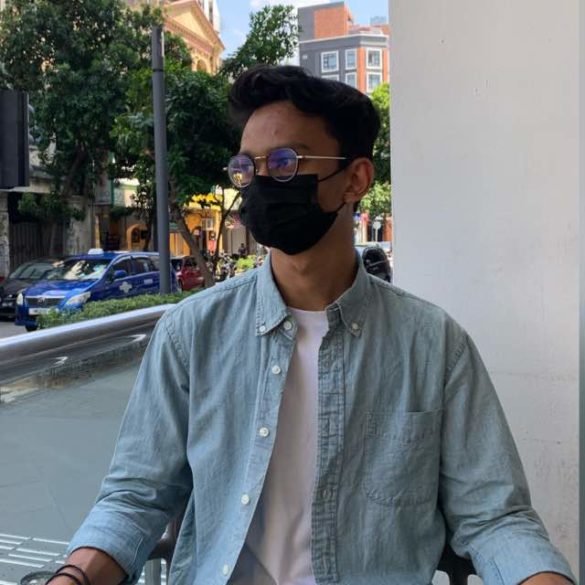